What are the Different Types of Bacon

You probably love bacon as much as we do and did you know there are many different types of bacon!

Bacon is widely popular and used in numerous dishes and is also huge for keto dieters. This savory pork meat used to be subjected for breakfast time only but now you can enjoy it in tons of meals no matter the time of day.

Bacon comes from all over the world, from Duck bacon to Pancetta to German and Jalapeno bacon; and have you ever heard about Samgyeopsal? That is also a type of bacon and there are also healthier varieties.

Today we’ll be covering all of them and so much more we’ll cover all you need to know about bacon including, how to make it, ways to cook it, recipes, and how to properly store it so you can get the best out of your delicious bacon.

How Is Bacon Made

It dates back to the 15th century when Chinese people began to cure pork bellies with salt, which is similar to the current process. In the times of yore, Greeks and Romans also had their own type of bacon.
Experts from the culinary world believe the bacon craziness took place at the end of the 20th century and with the boom of fast food, bacon found its reign in America.

Bacon, which is a product that comes directly from pork meat, is made differently depending on the region of the world you are in.
That said, the process of bacon making generally entail brine or hot or cold smoke, resulting in the smoky flavor bacon is known for.
What follows next is cutting the chunk of meat making it as thick as you want. Once you have the bacon slices all that is left is the cooking.

What Is The Thickness Of Bacon Slices?

When it comes to how wide bacon can be cut we have thick, regular, and restaurant segments.

In the culinary world, curing is known as the task consisting of curing the meat with smoke and salt in order to preserve it.
The most common way of doing this is to utilize enhancers of flavor such as salt or sugar. Brown sugar is particularly utilized for the process of curing.

Salt and sodium nitrite -an additive responsible for giving bacon its color, is used in cured bacon.
There are two methods to cured bacon, pump curing, and dry curing. In both, the amount of nitrites is supervised. While pump curing should not exceed 120 parts per million; dry curing bacon should not go over 200 ppm.

Check out below at least 15 different kinds of bacon. 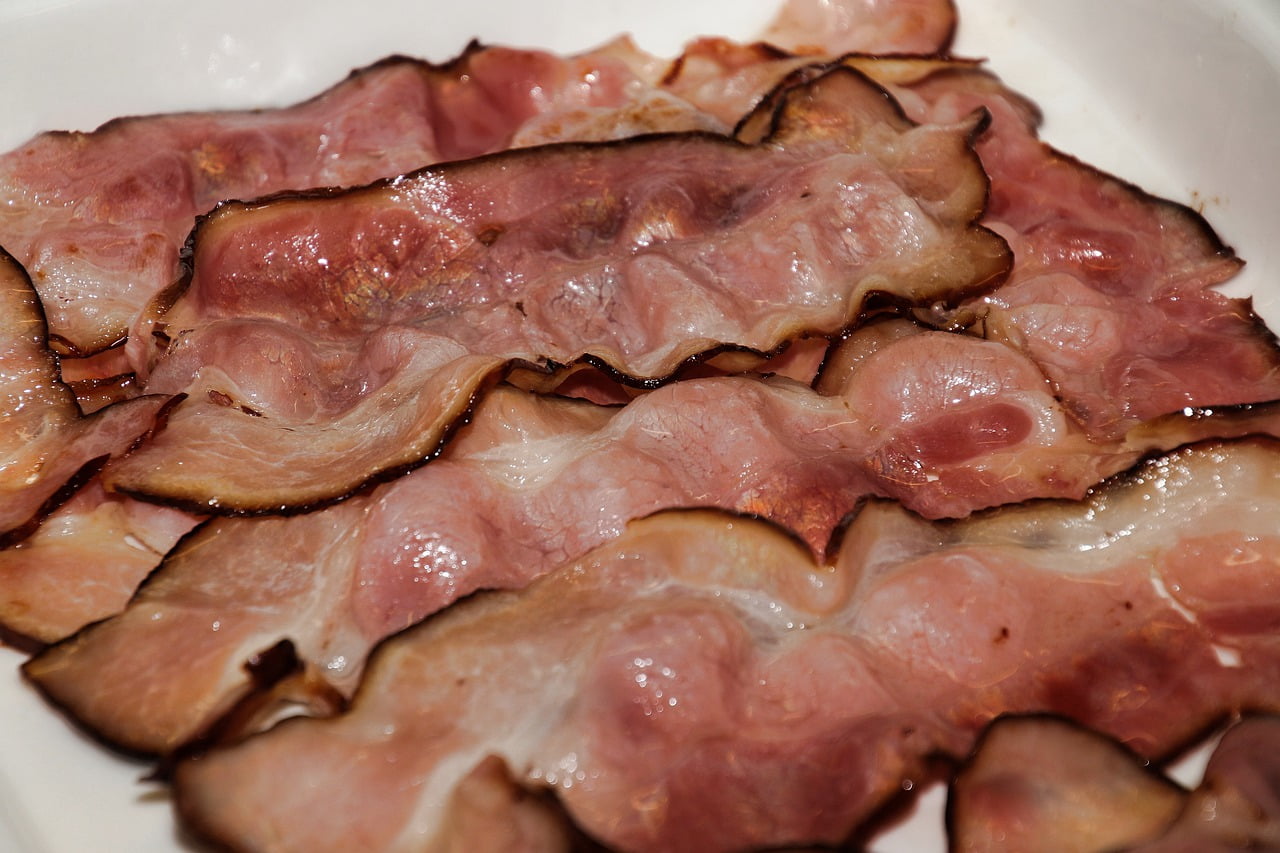 This type of bacon is an old-fashioned type used by, yes you guessed it, Gypsies! If you’ve ever been to Hungary make sure to try it out, it has an intense taste and smell. The main difference is that though is cured, still presents a rind.
Gypsy bacon is perfect to cook outdoor and is easily found in meat stores.

If you are not a fan of pork meat, then Duck meat may be the best way you can enjoy your bacon because it comes from ducks! Duh!
Duck bacon which is also cured is generally a cut that comes from the breast of the duck, it’s popular with people trying to avoid fat since it isn’t as fatty as bacon from pork.

Also called back bacon, Canadian is a fan favorite due to its thickness and due to its lean cut appearance is often mistaken with ham. This type of bacon is popular in the U.S. while in Canada is known as back bacon. 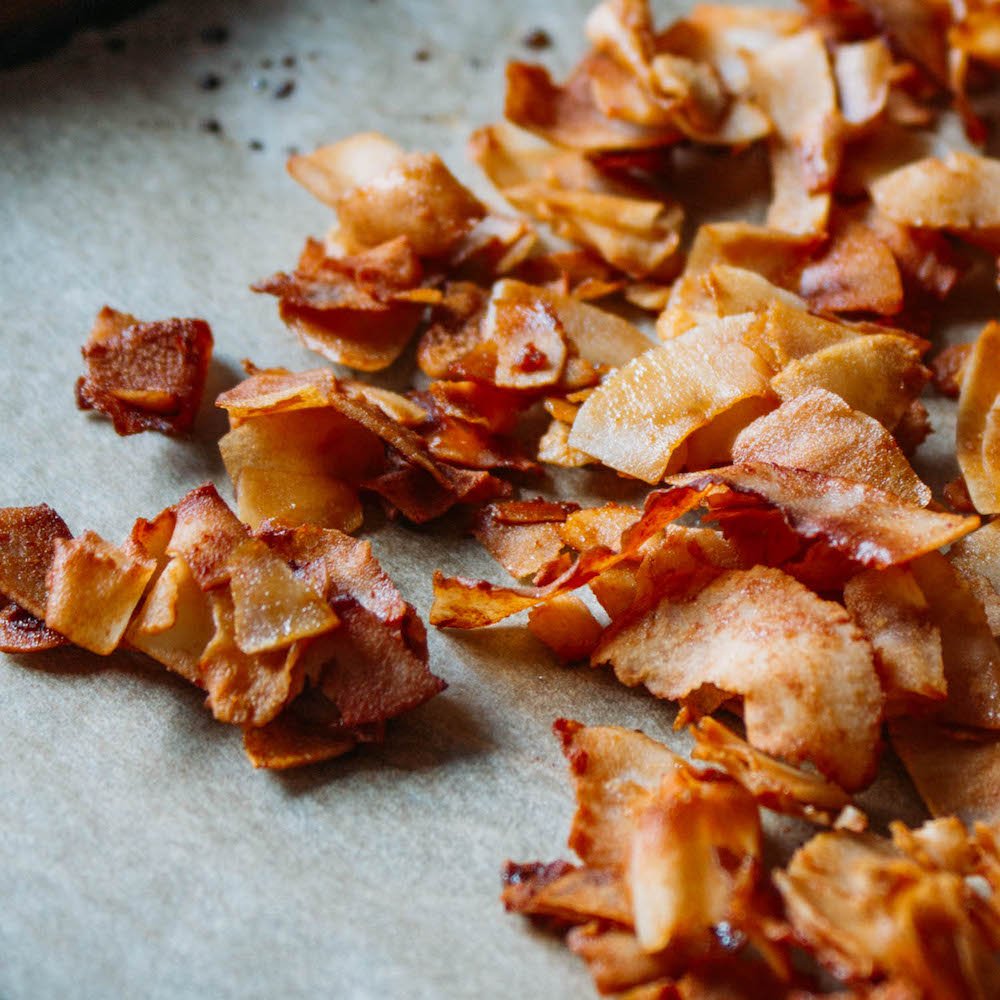 Coconut bacon is the answer from heaven for vegans, this meatless alternative is made with salt, spices, and coconut chips or flakes, soy sauce, and maple syrup; and believe it or not, with the right mixture this bacon reaches a flavor just like the real deal!

Pancetta hails from Italy and is widely appreciated by the rest of us. This bacon type which comes from belly pork is cured with salt and pepper. Pancetta comes in two varieties, stesa and arrotolata. The latter is used in sandwiches while stesa is utilized in past recipes.

If you’ve been to Korea and are a true bacon lover then you probably tasted samgyeopsal -which means ‘three layers of flesh.’
This type of bacon is fatty and thick and is typically grilled though it is not seasoned has a great taste.

Chicken fried bacon was originated in the 90s’, it consists of deep-fried bacon pieces and though it is not healthy at all, it remains a popular delicious appetizer.

Bacon that comes from deer and elk is described by many as the best type of bacon. Both bacon types have what it takes in terms of fat, to give these little strips a whole lot of flavor. Both are a perfect bacon option for those who don’t like pork. These types of bacon are usually accompanied by honey. Is the bacon of choice for hunters.

This bacon type hails all the way from China and as you can imagine is widely used in Asian foods. It comes from a portion of the pork belly and it is preserved by using different spices, brown sugar, and soy sauce.

This is a fatty bacon type that comes from France, it is found in cubes or slices and is also known as pork fat. Lardon is a versatile type of bacon that is utilized in tons of dishes including salads. A particularity of lardon is that it can’t be smoked and the only salt is used to cure it.

Salo, literally means bacon and is a typical food in Russia -where is served with on garlic bread. This type of bacon is cured with salt and it can be consumed in its raw state or cooked. If you wish to cook it, it is best to fry it, it is also recommended to be cooked with garlic, salt, and pepper.

Another non-pork option is turkey bacon, labeled a healthier choice to normal bacon. To make turkey bacon, the turkey must be seasoned and later cut into slices or strips. Turkey bacon is processed so it may have less fat but contains other harmful ingredients. It can be baked, fried, and even cooked in the microwave.

This type of bacon is mostly found in the Southern region of the U.S. Jowl bacon originates from the cheeks of the pork and it is both cured and smoked. It is essential in many soul recipes and is typically utilized in sandwiches. Jowl has another version called guanciale which is not cured or smoked.

German bacon or Frühstücksspeck refers to pieces of pork that have been smoked and cured. Wammerl and Griebien are also popular bacon options in different regions of the country.

With jalapeno bacon, you get the best of bacon and jalapenos! This combination is one of a kind and makes for a fantastic dish.

There are a few different ways you can enjoy your bacon, check out a few ideas and pick the one you enjoy the most.

The oven may be a good idea if let’s say you are a busy mom and want to avoid dirty and sticky pots and pans.
By cooking bacon in the oven sheet you can avoid making a major mess and cook everything right away.
All you need to do is heat the oven to 425 degrees, spread your bacon strips in your previously covered aluminum foil baking tray, and roast each side for six minutes. Your bacon will be cooked to perfection.

Cooking bacon in the microwave is easy peasy! And it is probably the most common way to do it. All you need to do is place your bacon on a plate and cook for 1 minute and voila.

When grilling bacon, do it for five to seven minutes placing each strip on top of the cool area of your grill. Grilled bacon is always the best way to cook bacon for your burgers.

In The Deep Fryer

If you want to obtain crisp and chewy bacon, then the best way to do so is by deep-frying. All you need to do is take your bacon strip and gently place them in boiling oil for five minutes.

In Its Own Fat

It’s a given that bacon has a lot of fat and grease is detached when cooked so, many opt by cooking their bacon in its own fat. All you need to do is store the fat that bacon secrets in a container and use it next time you are craving bacon.

How To Keep Bacon Fresh?

To keep your bacon in optimum condition, you need to store it properly. You can store your bacon either raw or cooked.
Raw bacon:
Bacon strips come in airtight packages that must be kept in the fridge. If not yet opened it can last a week past the due date.

After you’ve opened the package, in order to keep it fresh, bacon should be kept fixed in aluminum foil or a Ziploc bag and use within one week.

Once your bacon is done, let it cool down and drain. Transfer it to a plastic bag or sealed container and refrigerate for up to five days.

How To Store Bacon So It Stays Fresh For Longer?

You can make your bacon last longer by freezing it.

Unopened packages of bacon can be stored in the freezer for a whole month.

A good storing idea is to split the package into equal serving sizes for freezing. Just make sure to wrap it tightly in foil or plastic. Write down the date. You’ll have bacon for several weeks.

Cooked bacon can also be frozen, just section the bacon and fold it in a paper towel then transfer each portion into freezer bags. Your cooked bacon will be good for about six weeks.

Can You Freeze Bacon?

Yes, bacon can be perfectly kept frozen.
By freezing bacon you can be certain that you’ll be extending its shelf life.
According to experts if stored well, frozen bacon can endure in good shape for about six months. That said, it is advisable to consume it after one month of freezing in order to enjoy its optimum texture and flavor.

What To Do With Bacon Before It Goes Bad?

If the bacon has changed in texture, smell, and color; these are all signs of spoilage.
Bacon that’s going off, may change to a slimy texture, it can also seem sticky or moist. Not only that, its red color may become dull and also present a sour smell. If you notice your bacon having these signs get rid of it to avoid food poisoning or food contamination.

But right before bacon goes bad, you still may be able to use it in a number of recipes.

Here is a super easy and delicious appetizer for those with a demanding palate, best of all you don’t have to step out of your house to enjoy delicious and low carb Brie cheese wrapped in bacon! Forget about regular cheese this is to die for!

You’ll be a hit among your friends next time you show up at the party with this amazing keto-friendly appetizer! Bacon-Wrapped Jalapeño Poppers are quick and easy to make, using your air fryer and with this twist, you won’t be missing any of that breading.